A few random tips for Arduino programmers. We cover saving RAM by storing text in program memory, making your programs easier to read, a technique to avoid being held up in delays, the C++ ternary operator and the watchdog timer. 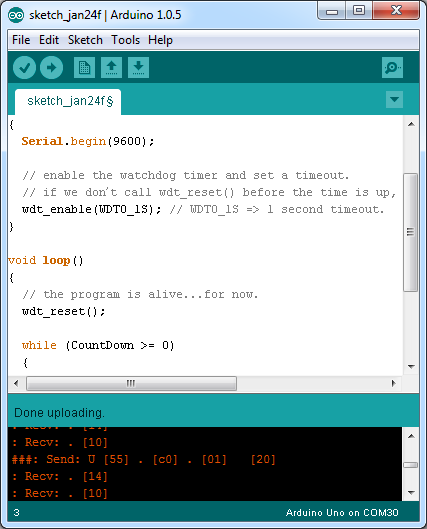 When you write:
Serial.println(“Hello World!”);
the text ‘Hello World!’ is stored in two places:

The contents of RAM are lost every time the Arduino is reset, or the power is lost. Program memory is retained through reset and power loss, so at the start of each program, normal strings are copied from program memory into RAM so they can be used by your program.

Many Arduino boards don’t have much RAM though: there’s only 2 kb on the 328 chip used in the Uno, for example. So it is easy to run out of RAM if your program uses many strings or other variables.

When you write:
Serial.println(F(“Hello World!”));
the println function gets the text from program memory directly, using a temporary buffer that doesn’t eat up lots of precious RAM.

The delay function stops your program dead. The classic blink program spends most of its time doing absolutely nothing:

Think of all the great things you could do in that dead time: reading sensors, making noise, driving motors. Delays can be useful, but often they are just a waste of time.

There’s an easy way around it, but we’ll need a few variables:

And the loop becomes:

This is called a ternary operator…because it has 3 arguments:

It is easy to create code that is hard to follow using this tip. Use it wisely!

The Arduino’s microprocessor includes a watch-dog timer. The watch-dog timer is a sort of dead-man’s switch: if your program doesn’t keep telling the timer all is well, it will blow up the Arduino.

Actually, it just resets the micro: what you do on reset is your own responsibility.

To use the watch-dog timer, you’ll need to:

This example should work on any Arduino that uses a microcontroller from Atmel, including the Uno, Mini and Mega. Note, older Mega’s had a problem in their bootloader. If you set the watch-dog timeout too low, you won’t be able to reprogram the Arduino using the serial bootloader. Update to the latest Mega bootloader to fix that.

This program contains a bug which means the countdown will never finish. Can you spot it?